The Fall of Charity 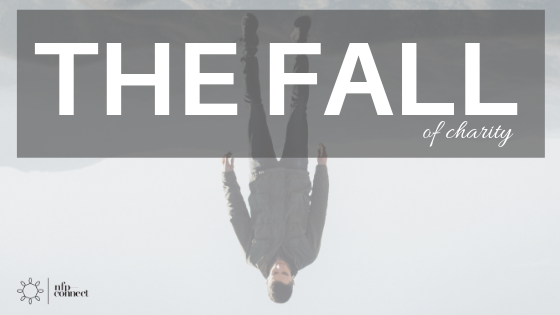 A friend recently resigned from her role after 23 years of service to the same organisation.  You would’ve said her blood is the colour of the logo, she was thatinvested in the organisation and the people she served. But grievingly she stepped away, because the organisation turned her role and others’ upside down, and she felt she couldn’t work there anymore.

What I find interesting is that she wasn’t static. I understand that during a restructure, managers focus on managing people out. Some lose their roles because they’re not willing to change, however, this wasn’t the case for my friend.

I wish this was the only scenario I’m seeing at the moment. I am so riled up because this isn’t the first time or the last that we will see such a decimation of a charitable organisation. It’s happened at this organisation before, and it’s happening all over the place, and I don’t think we understand the long-term impact a poorly executed restructure has on our communities.

I will for this article, focus on fundraising, but you could change the word fundraiser to client services coordinator, business development manager, nurse or carer.

A fundraising role is all about the relationships.  If you want to raise the money you have to build rapport, establish a connection and trust to ensure that the donor feels confident to give you the money.  Whenever someone asks me if I know any excellent fundraisers, they need to have already established relationships, a good rapport, understand fundraising and be able to speak to the volunteer, CEO and major donors and possibly all at the same event.

So, when an outstanding fundraiser resigns and doesn’t receive any acknowledgement of her service until 3-4 days after her departure, I find this astounding.

The current language we are acting on and using is that charity needs to become more like a business. So…a business CEO walks into a charity… (I wish this was a joke, but it’s not) and board members bring in well-meaning leaders to restructure and ‘fix the charity’; this is their first mistake.

There’s a philosophy that I often refer to, when discussing the difference between a business and a charity;

The foundations of business (it’s cornerstones) are – structure, systems and processes.

The foundations of a charity are – care, compassion and nurture.

No one has yet disagreed with me, (even my high-level executive friends).

Due to their polarity of service outcomes, they speak entirely different languages; they sit on the opposite ends of the pendulum for them to succeed.

A businessperson comes into a charity and assesses its viability.   They take a look at the overheads, the bottom line and start making adjustments and systemising the care into a process and structure.  I get that a charity needs to be more transparent and have more accountability but the problem we face is that you can’t systemise empathy, you can’t put a process on how you’re going to support a parent through their child’s cancer, or put a structure in place to help a mentally ill individual manage their diagnosis.

We are killing the care and not because we mean to, but because we’re trying to turn one into the other instead of working out a new way of functioning that incorporates both.

There is a need to redefine and create a new structure that balances out the pendulum, that leads and understands that a profitable charity is profitable because it focuses on how many patients were served, supported and hopefully have a new lease on life because of the care they received, and the system supported this transparent process and held the organisation to account for its client care, not the amount of money raised.

As a fundraiser, I would raise my budget then get a 10% raise on my target the following year because ‘that’s good business’ not because there were more patients to support. We’ve got it all wrong, and it’s failing the organisations and the community they’re supposed to be serving.

When a valued staff member leaves… the clients see it, the donors see it, and the community will eventually have to pay for it. Because if relationships are the reason people heal, and your organisation experiences continual turnover due to poor management then the clients will be affected, their ongoing support of the organisation is impacted and the government will have to foot the bill.

Then there’s the loss for the organisation.  Sure, you save money in the immediate future in staff wages, but the actual cost of a mismanaged and non-communicated ‘restructure’ isn’t calculated or brought to account.

Do we have statistics on how long it takes to recover from a restructure?  What is not considered is the cost it takes to re-hire and re-educate, and the time it takes to re-establish the relationships that make an organisation function.

We need a new language. We also need brave leaders, equally brave board members, and accountability to combat the decimation that is happening at the moment.

People want to make a difference but don’t understand the impact their leadership has on the very reason why the organisation came to exist.

We’re all responsible for this.  The current cost for the way we are doing things is enormous.

I get the need for change, but we’ve got it all wrong. The cost to our community is immense and nobody is talking about it.

So, I thought I would.

Giving – It’s not a competition